Johannesburg – The Fourth Industrial Revolution (4IR) continues to evolve at an increasingly rapid pace, with direct and indirect effects on our lives.

4IR is simply a description of the way in which various technologies are being introduced into society and industry, including Artificial Intelligence (AI), the Internet of Things, robotics, cloud computing, and complex wireless technologies.

The coronavirus is a health crisis that has led to loss of life, economic activity and jobs on a catastrophic scale.

However, the ongoing global calamity has also accelerated the speed at which the 4IR is eliminating the proverbial “business as usual” in the way we work and live.

Fast-tracking the adoption of the 4IR in South Africa should be seen as the silver lining of the Covid-19 pandemic.

But how is this so?

Before answering this question, we need to take a brief look at where 4IR comes from.

South Africa would experience its own revolution in about 1897, when diamonds were first discovered in Kimberley in the Northern Cape.

The Second Industrial Revolution started in the mid-19th century, with science and technology being applied on an even larger scale.

Among other things, steelmaking processes and factory assembly lines led to mass production. During this time, the world welcomed its first
telephone, TV, and motor car.

Electricity grids and railway lines developed and aircraft were used for commercial purposes by the first half of the 20th century.

Where there was disposable income, electric household appliances such as fridges and washing machines became widely used as the century progressed. Agriculture also became increasingly mechanised.

Also known as the digital age, the Third Industrial Revolution started in the second half of the 20th century, with the world moving from traditional mechanical processes to digital automation in industry and other spheres.

Computers became mainstream, information storage and exchange took off, and in the 1990s the internet and cellphones came into ordinary people’s lives.

In 2016, the term “Fourth Industrial Revolution” was coined by the head of the World Economic Forum to describe the speed, scope, and impact of technological breakthroughs, now growing at an exponential rate.

This revolution introduced a phase of innovation in technology that brings together the real, the virtual, the digital and the biological.
Connecting these spheres involves augmented reality, the Internet of Things, 3D printing, robotics, AI, big data analytics, cybersecurity and cloud computing.

As South Africa started embracing and implementing 4IR strategies to transform the economy and improve the quality of people’s lives, the Covid-19 pandemic struck and the focus was on stopping the spread of the virus to save lives.

A hard lockdown was one of the measures to achieve this goal. Many businesses had to close, and people needed to work from home if at all possible.

Organisations were forced to fast-track their digital transformation strategies to accommodate the shift of the workplace to people’s homes. 4IR technologies like cybersecurity and cloud computing quickly became important.

With the closure of schools and universities, institutions of learning had to adapt to online modes of teaching and learning. 4IR technologies became the life saver.

3D printing was used to produce ventilators and personal protective equipment as part of the medical response to the pandemic.

Big data was used to store and analyse massive amounts of information about the virus, its spread, its symptoms and the demographics and comorbidities that affected patients’ chances of infection and recovery.

The insights gained from big data could be used to inform government decisions on how to minimise the pandemic’s negative effects on lives and the economy. They will also prepare us for the next inevitable pandemic.

Taking all this into account, however, I believe the one silver lining to be found in the destruction of lives has been the fast-tracking of the adoption of the 4IR.

As South Africa continues its fight to contain the pandemic, it still needs to implement key fundamental changes – from improving the digital literacy of the general workforce to developing high-end skills, from increasing access to the internet to growing technological infrastructure, from designing multidisciplinary curricula centred on the 4IR at institutions of learning to introducing primary school children to coding and robotics.

Let us embrace the 4IR and its benefits, leaving no one behind.

Dr Lugayizi is subject group leader and senior lecturer at North-West University’s department of computer science – Mafikeng Campus. The opinions expressed in this article are those of the author and do not necessarily reflect those of North -West University or the organisation responsible for the article’s publication. 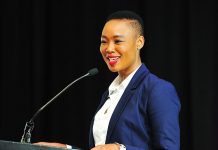