Amajita held to a 2-all draw by Zimbabwe 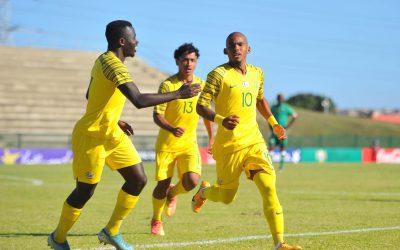 Johannesburg – South Africa under-20 national men’s team, Amajita began their U20 COSAFA Championship campaign with a 2-2 draw against neighbours Zimbabwe at the Wolfson Stadium in Port Elizabeth on Thursday afternoon.

Amajita took time to settle down and they were punished in the 8th minute through a Panashe Mutimbanyoka header. The goal proved to be a wake-up call for the hosts as they began creating more opportunities. However, no goal materialized from any of the chances they created and the two teams went to half-time break with Zimbabwe in the driving seat.

Oswin Appollis opened the second half with an equalizer for South Africa and it seemed like Amajita were back in the game until a miscommunication from the South African backline saw Lexington Mujokoro put Zimbabwe in the lead again on the 78th minute.

With a spot in the Mauritania 2021 Africa U-20 Cup of Nations up for grabs, Amajita were not ready to go down without a fight and Mohlala Makola found the breakthrough goal at the brink of fulltime to salvage a draw for Amajita.

Speaking after the encounter Amajita coach Helman Mkhalele expressed his satisfaction with the last minute goal and the draw.

“We encouraged the players to let the ball run because the more we let the ball run the more we reserve energy to keep attacking. Although we were a bit late in terms of making passes, I am happy with how we created the chances and eventually got a goal,” said Mkhalele.

Amajita will face Lesotho in their second group game on Sunday, 6 December at Wolfson stadium. (15:30pm) live on www.cosatv.com