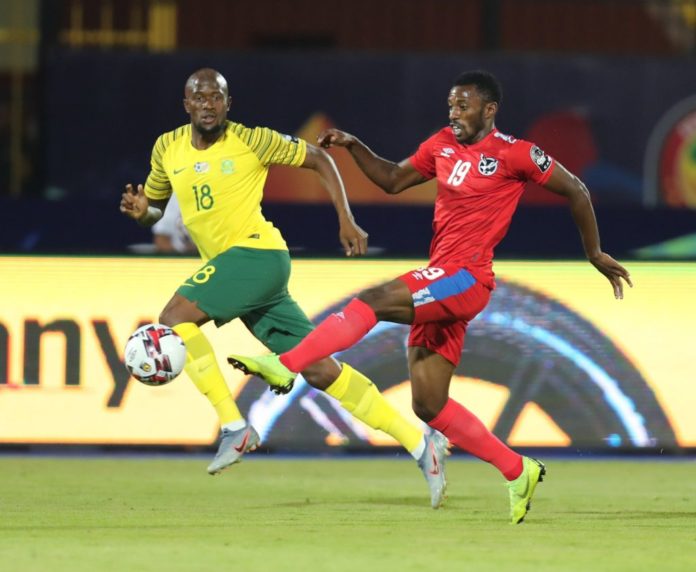 Bafana Bafana should brace themselves for a more bruising encounter against Zambia’s Chipolopolo on Sunday compared to the timid 1-1 drawn encounter they managed to pull off against Namibia at the Royal Bafokeng Sports Palace in Rustenburg last night.

As early as the 11th minute, Mthobi Mvala, who recently made a move to league champions Mamelodi Sundowns after Highlands Park was sold, became the first player to be booked in a match marking South Africa’s return to international football since the outbreak of the coronavirus seven months ago.

Forward Luther Singh opened the scoreline for Bafana, his first for the senior national side, after receiving a short pass from Kermit Erasmus inside the box to beat Namibia keeper Virgil Vries.

Bafana dominated the first half and captain Ronwen Williams was hardly tested, as he had a relatively quiet night but towards the end of the first half, the Nambians showed their intentions to claw back through counter attacks, notably Peter Shalulile’s shot going wide after beating the Bafana defence.

And the Brave Warriors were deservedly rewarded with an equaliser in the 55th minute through Absalom Limbondi, who beat Williams with a low shot, thus punishing the out of position SA defenders.

With the game level, there was undoubtedly a lot at stake for both sides and pressure was written all over the faces of both sides’ coaches as they looked to their charges to get the winner.

There were few promising moments for Bafana, particularly scorer Singh’s composure when in possession. He definitely does looks like a future striker and the national team’s hopeful to remedy the bluntness in front of goal going forward.