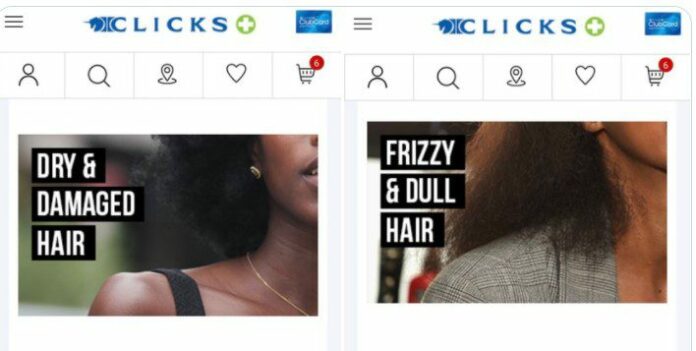 Retail chain store Clicks is in hot water for a hair promotion that demeans Black women. The pictures show a black woman’s hair described as dry and damaged, while the hair of a white woman is described as ‘normal’.

After a backlash on social media, the company has issued an apology.

“We would like to issue an unequivocal apology. We have removed the images which go against everything we believe in. We do not condone racism and we are strong advocates of natural hair. We are deeply sorry and will put in place stricter measures on our website.”

“We have made a mistake and sincerely apologise for letting you down. We recognise we have a role to play in creating a more diverse and inclusive S.A, starting with our website content. We know we need to do better, and commit to ensuring our content better reflects this value,” reads their statement.

But various celebrities, including men, have condemned their behaviour and have vowed to boycott the store and their products.

Zakes Bantwini tweeted that they did this on purpose.

“ENOUGH IS ENOUGH! these corporations do this on purpose! Knowing that all they will do is apologize on twitter and other platforms! Thinking it will just end there! We saw @hm do the same thing, now @Clicks_SA following suit! THEY TRULY UNDERMINE US! and UNDERESTIMATE OUR POWER!.”

“Can you imagine how f**ked a company is for an entire marketing team to call straight hair normal? Can you imagine the dynamics that not a single person of colour involved, if any, was empowered enough to call ‘bullshit’ & be heard? Ironically, Clicks’ culture doesn’t click,” he said.

Actress Bonnie Mbuli wrote: “Putting my money where my outrage is!!! i’m never buying @Clicks_SA ever again, from now on i’ll be purposeful about buying black hair products from women who look like me and love our hair.”

Miss Universe Zozibini Tunzi said the campaign was not only disrespectful to black lives.

“It is also evidence of an absence of representation and diversity within the organization. And we are talking about a South Africa with a population of about 80% black people (stand to be corrected). No ways.”

Mbuyiseni Ndlozi of the EFF also weighed in on the matter.

“Racism is violence! This Clicks add is a violation of human right and dignity of black people. It is the reason white supremacy persists to this day. It is the basis of the racial humiliation black people experience at the hands/eyes of whites,” he said.