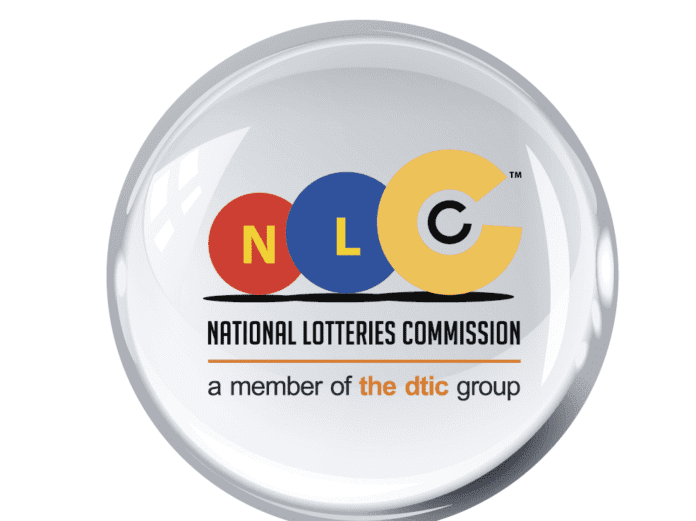 A Conversation Brought To You by the National Lotteries Commission

Johannesburg – A conflict of duty happens when a person is required to fulfil two or more roles that may be in conflict with each other.

It can be an actual, potential or a perceived conflict of duty.

For example, a director may also hold a position as a public servant, or they may be a member of the board of another public entity or body.

A conflict of duty may also arise through a director having official duties in respect of other government bodies, community and professional associations or non-governmental organisations.

An example would be an NLC employee who is a lay preacher and his/her church applies for NLC funding and s/he does not declare that they are the leader of the church. 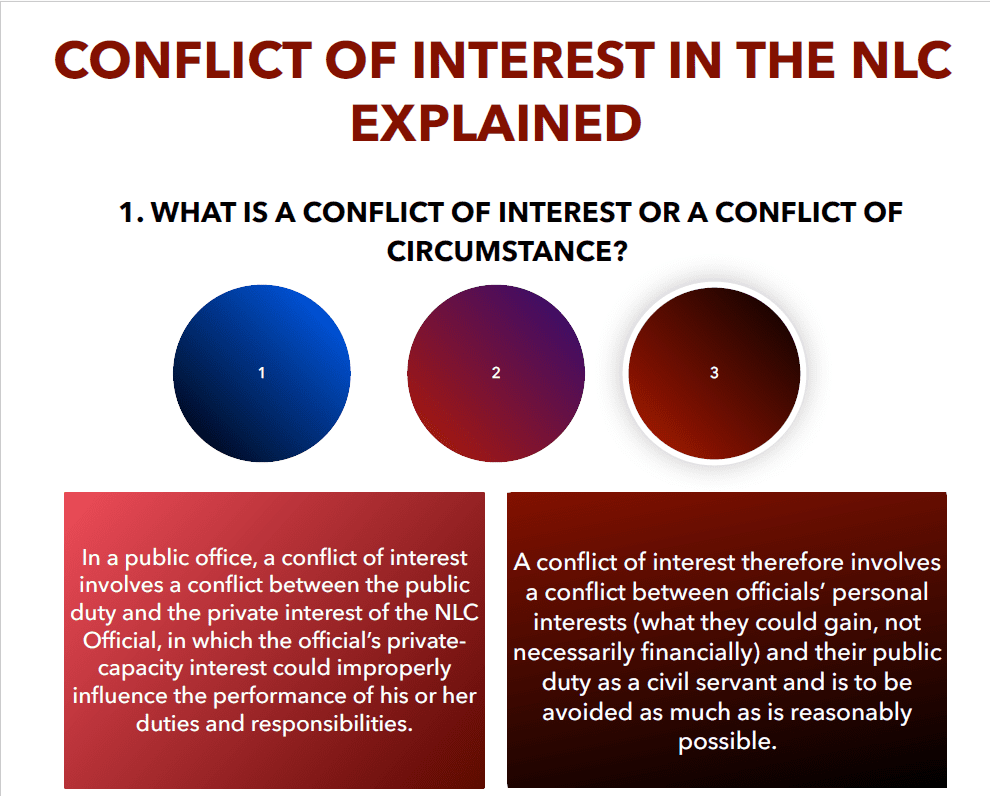 A Potential Conflict Exists When an NLC Employee Has Interests Which Are Not Relevant, but It Is Reasonably Foreseeable That in the Future, Personal Interests Could Become Relevant Interests.

2. Perceived conflicts of interest or conflicts

This is the situation where an NLC employee has existing private interests that are relevant (which will interfere with objectivity).

The intensity of the conflict of interest is of such an extent that it cannot be managed and must be disposed of or ceased. 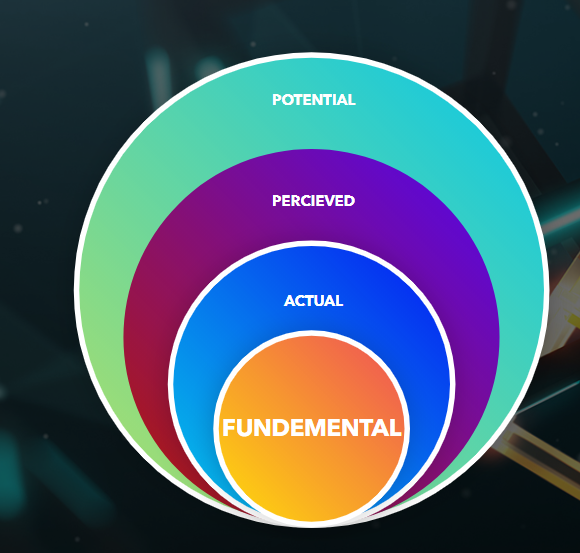 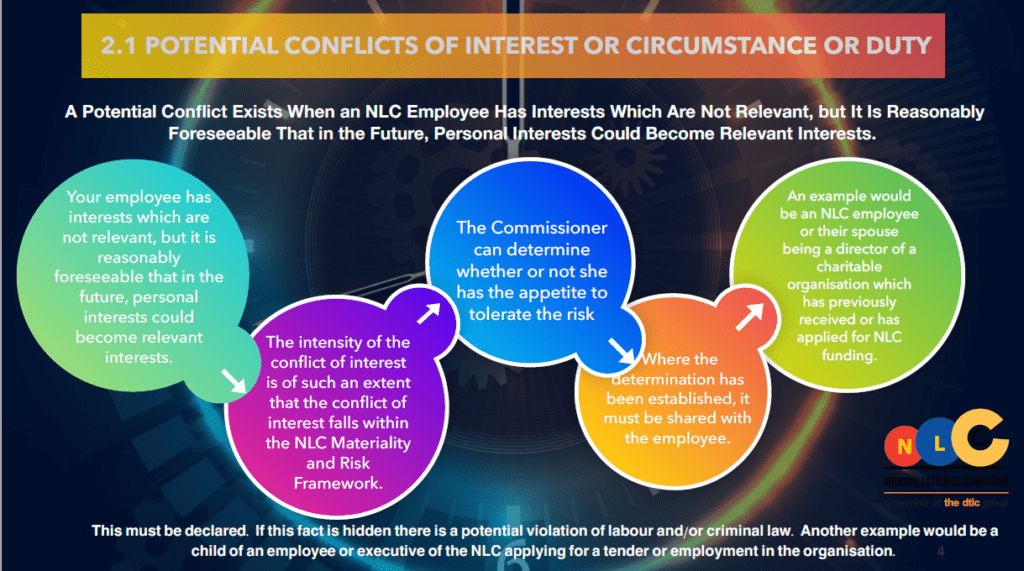 A perceived conflict of interest is one in which a reasonable person would think that the official’s judgment is likely to be compromised.

This Is the Situation Where an NLC Employee Has Existing Private Interests That Are Relevant (Will Interfere With his/her Objectivity).

The Intensity of the Conflict of Interest Is of Such an Extent That It Cannot Be Managed and Must Be Disposed of or Ceased.

An Example Would Be an Employee or a Spouse or Child of an Employee or Executive of the NLC Being a Director of a Company That Has Received a Tender in the Organisation.

Alternatively, a Child of an Employee Being Offered Employment in a Department Where Their Parent Works Is an Actual Conflict of Interest, Circumstance or Duty. 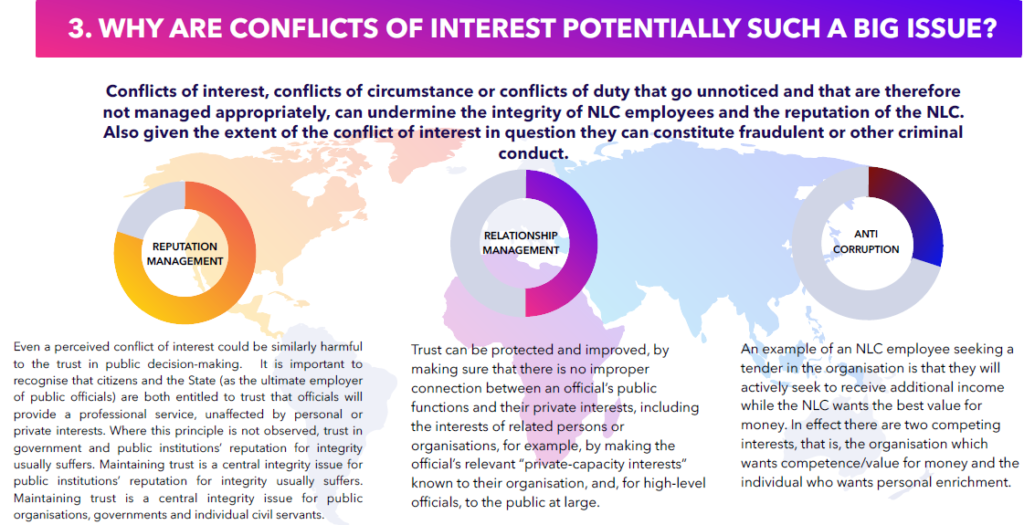 What the NLC says about dealing with conflicts of interests?

What are our obligations in terms of the NLC conflict of interest framework?

“All NLC employees and leaders must annually disclose their interests or as soon as the facts change.”

What type of recommendations are made in the assessment report? 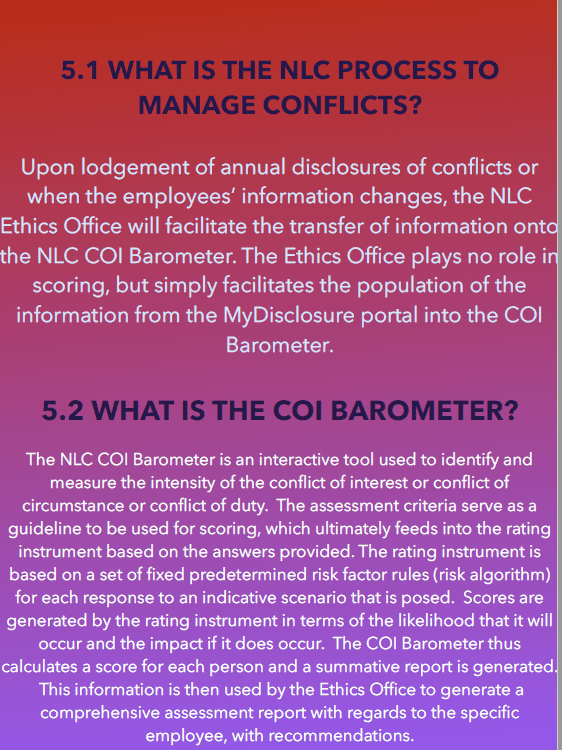 A comprehensive assessment report is subsequently issued for employees where the expectation is for employees to rebut or remedy the result of the assessment. The recommendation within the report guides the Employee, Divisional Head and the Commissioner on how to manage the conflict of interest or circumstance or duty pertaining to the employee. 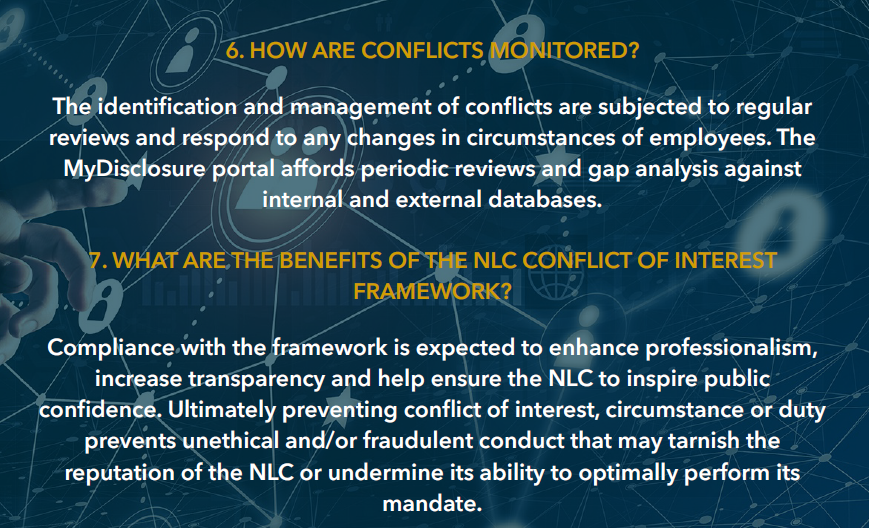