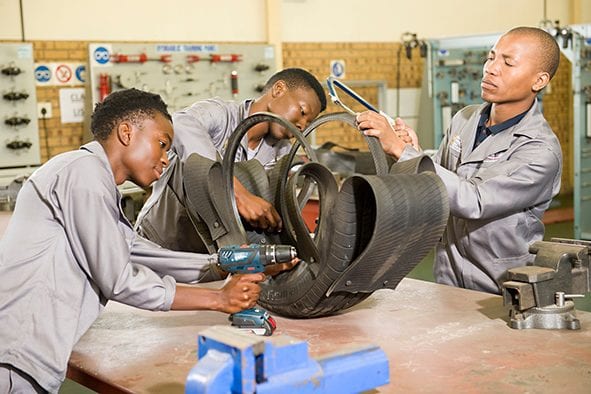 Technical and vocational education and training (TVET) colleges are set for a major overhaul following German Chancellor Angela Merkel’s state visit to the country.
President Cyril Ramaphosa and Merkel this week signed a joint initiative on the promotion of vocational training in South Africa. Ramaphosa said the country could benefit a lot
from studying the German model of dual education.
“Part of our discussion with the chancellor today focused on how we can work together to strengthen technical and vocational education in South Africa,” Ramaphosa said following
his meeting with Merkel.
“We know that Germany has one of the most admired and successful training systems in the world, and we look forward to finding ways for us to learn from each other’s experiences
and build a world-class skills development system for young people in South Africa.”
A common perception in South Africa is that it takes a university degree to get a good job.
Germany’s dual training system combines practical training at the workplace with theoretical classroom instruction to help trainees transition into work life.
Vocational education and training in Germany is a common pathway to gaining skills and embarking on a journey to successful careers.
About 47.2% – nearly half – of the German population held a formal vocational qualification in 2016.
In addition, Germany’s standing as a country with one of the most productive workforces in the world is strongly aided by its vocational and education training system, which supplies
Germany’s companies with well-trained employees.
According to the World Bank, Germany has one of the lowest youth unemployment rates in the European Union.
South Africa has commenced the building of nine new TVET college campus sites scheduled for completion this year.
These are in Sterkspruit, Aliwal North, Graa Reinet,Ngungqushe, Umzimkhulu, Greytown, Msinga, Nongoma and Kwagqikazi.
There are currently more than 700 000 students in the TVET system.
Minister of Higher Education and Training Blade Nzimande has appointed an “industry envoy” in his office whose responsibility will be to interact with industry and ensure what
is taught at TVET colleges is in line with the skills companies need.
By Kabelo Khumalo

Minister of Basic Education Angie Motshekga said today, that grade 7 and 12 learners will resume their academic year from the beginning of next...
Read more
Education

UP, UCT are among the top institutions  The University of Pretoria’s (UP) Gordon Institute of Business Science (GIBS) and University of Cape Town’s (UCT) Graduate...
Read more