Tantrum-throwing Ngcobo should be severely penalised by Amakhosi 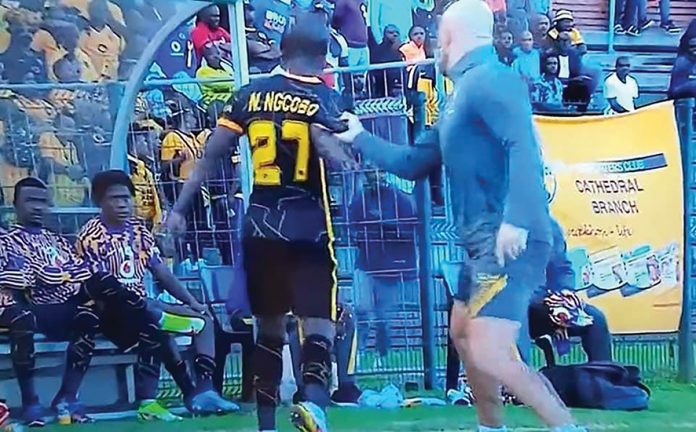 It is often said that sport, and more so football, is an emotional game. That said, however, players must always guard their emotions so as not to exceed the generally acceptable norms and standards.

After being substituted after Amakhosi’s below-par performance during their 2-1 away midweek defeat by Golden Arrows, centre-back Njabulo Ngcobo was livid. He brazenly walked past his stand-in coach Arthur Zwane, refusing to accept the coach’s offer of a handshake.

After his tantrum, goalkeeper coach Lee Baxter confronted Ngcobo and a scuffle broke out as Baxter tried in vain to force Ngcobo to apologise to Zwane or at the least shake his hand. It was a show of utter disrespect for the interim coach who took over the reins from sacked Englishman Stuart Baxter two weeks ago.

Some of the players on the bench also tried to defuse the tension by attempting to convince Ngcobo to calm down. Ngcobo was unrelenting.

Zwane has since given his side of the story regarding the handshake incident captured on camera for all to see. The likeable Glamour Boys tactician said as a former player himself, he fully understands Ngcobo’s reaction.

Downplaying the whole saga that has set tongues wagging, he said perhaps Ngcobo was despondent with his performance as the player was of the view he could have done better by following the coach’s half-time instructions to the letter. Sugar-coated diplomacy on the part of Zwane, I must say.

The bottom line is that Ngcobo’s outburst was unjustified and unwarranted after his two glaring mistakes. The first led to the equaliser by Siboniso Congo, the second gifted Knox Mutizwa another opportunity to score but he failed to capitalise on it. Thereafter, he snubbed the coach for his own doing.

Abafana Be’sthende, a side that has just fired its coach, Lehlohonolo Seema, got into the PSL’s history books by becoming the second team within a week to complete their first league double against Chiefs. Last week, Stellenbosch’s Stellies also recorded a double over the boys from Naturena.

What must the coach do if you are not playing according to his instructions? Ngcobo undermined his coach. Nothing more, nothing less. And in future, he must ensure he guards his temper, otherwise, it will land him in a more precarious situation. He has since apologised.

Chiefs’ management must come down hard on Ngcobo and sanction him for bringing the club into disrepute. The scenes were disgraceful. Wearing the Chief’s badge, or any other club’s badge comes with responsibility.

The ball is now in the Amakhosi top brass’s court to act decisively to stamp out his kind of behaviour.