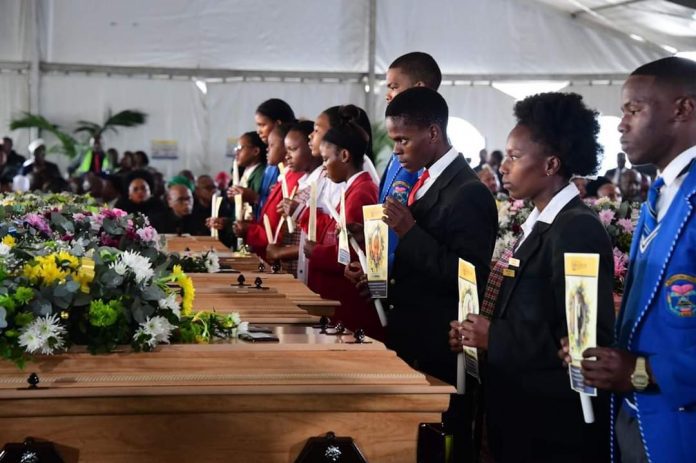 It is still not known what caused the deaths of 21 teenagers at the Enyobeni tavern in Scenery Park, East London more than a week ago, mourners heard during the mass funeral service on Wednesday.

The health deputy director-general in the Eastern Cape, Dr Litha Matiwane, told families and mourners that tests from the toxicology laboratory in Cape Town are yet to be completed.

The samples that were collected from the postmortems conducted at Woodbrook mortuary have been sent to the laboratory for further testing, said Matiwane, re-emphasised that the stampede has been ruled out as the cause of deaths.

The teenagers were partying at the popular local joint and celebrating the mid-term holidays in the early hours of June 26 when they dropped dead one by one.

At the funeral service venue on Wednesday, the mood was sombre and family members and learners could be heard weeping and groaning from the moment the 19 coffins were brought inside the giant marquee.

The mourners continued to express their emotions when the 21 obituaries were read out aloud. Two of the victims will reportedly be buried privately by their families. Eastern Cape premier Oscar Mabuyane said the tragedy could have been prevented if everyone, from the families to the government, had played their part.

“We are gathered here to mourn what could have been avoided if we were all able to play our part, from the family unit to the government,” said Mabuyane, adding that it was not the time to shift the blame.

“It is time to find a way to accept what has happened, which we cannot change. It is time to correct what we failed to do because there are things that we could have done.”

Cele told the mourners that he would return to Scenery Park to answer to community’s questions. “There are questions that need to be answered but not here. People have been asking when are we going to see an arrest,” said the police minister.

He added that a team made up of police officers and prosecutors is investigating. “When we pounce on the wrongdoer, we want to make sure there’s no escape,” he added, noting that when he returns to Scenery Park, it will not be business as usual.

Also Read: Potholes fixed ahead of Ramaphosa&#8217;s arrival at funeral