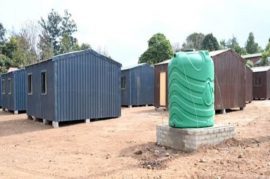 Johannesburg – The Special Investigating Unit (SIU) is expected to institute civil proceedings in the Special Tribunal against construction company, Aventine CC, to recover financial losses suffered by the State after the unit concluded an investigation into a temporary housing construction tender awarded to the company by the Limpopo Provincial Government.

It is also seeking to have the R15.3 million tender set aside.

The tender was for the construction of 192 temporary housing units – known as Talana Shacks – at densely populated informal settlement in Tzaneen and Burgersfort, during the national state of disaster last year.

The tender was referred to the SIU for investigation by Limpopo Premier Stanley Mathabatha.

“The SIU investigation has revealed that the tender was fraudulently obtained. The appointed service provider, Aventine Group CC, made misrepresentations and forged documents of industry experts with no links to the company to influence the direction of the bid,” the law enforcement agency said in a statement.

The SIU said the company completed only 40 temporary housing units in Tzaneen.

“The service provider [then]… submitted two invoices totalling over R2.5 million, which were paid between April and October 2020. In Burgersfort… no structure was completed. The SIU has referred evidence pointing to criminal action against the director of the Aventine, Constance Mohlala, to the National Prosecuting Authority for further action,” the statement said.

According to the law enforcement agency, Mohlala has since been arrested by the Hawks in December 2020 and is “facing criminal charges for submitting fraudulent documents to influence the direction of a tender”.

“Furthermore, the SIU made a referral to the HDA recommending that the service provider be restricted from doing business with government. The matter has been escalated by the HDA to National Treasury for consideration,” the SIU said.